So, there we have it.  This is how the fermentation workshops I was booked onto this weekend are part of an art installation.  Culture explored in each of these three variations.

The event I went to on Saturday was called The House of Ferment.  It was described as ‘an innovative arts project created by Karen Guthrie and Grizedale Arts……[The House of Ferment] is a collection of cultures, part installation, part workshop, part mobile workshop.’ 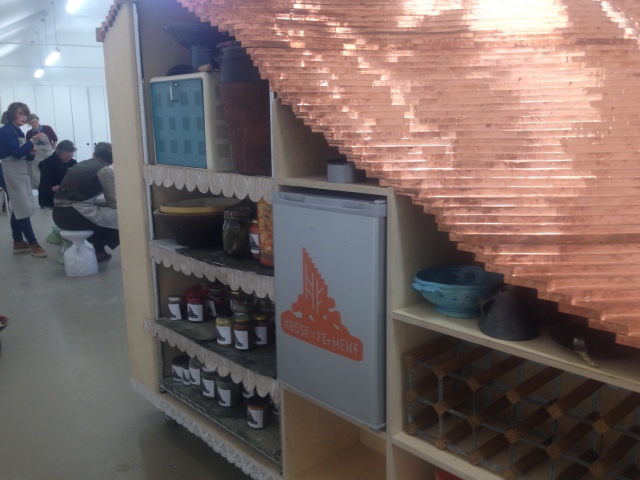 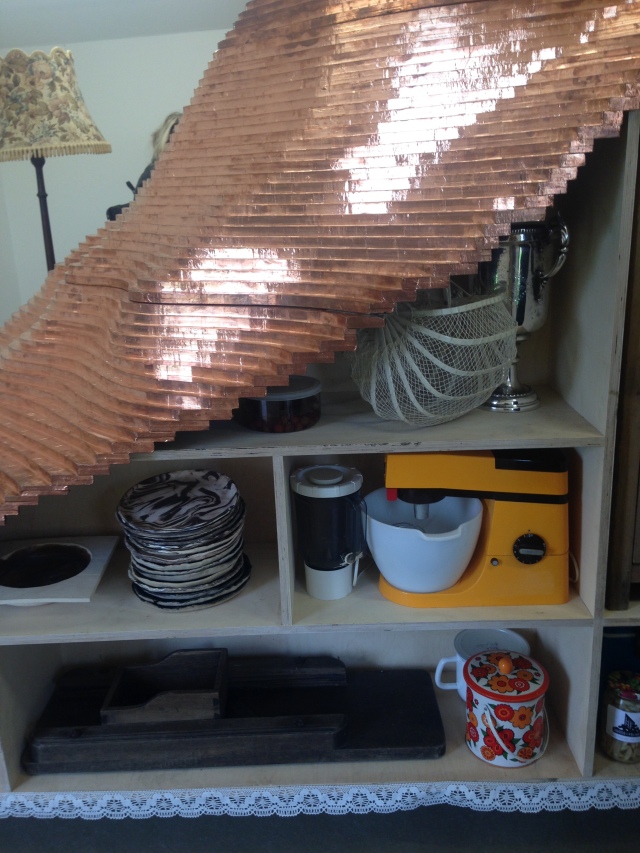 The central exhibit of The House of Ferment is a mobile storage unit, with a hidden inner area, the format inspired by a traditional Swedish underground larder – a storeroom built into a mound of earth in which food can be kept at a steady 4 degrees C all year round.  I found it very beautiful, especially in its celebration of the everyday, the ‘ordinary’, the domestic culture.

Inside it are shelves to hold preserved food, and a dark space where films can be shown (to a select few! – it’s a tight squeeze).  Outside are shelves holding an eclectic collection of domestic utensils of use in preserving, storing or eating food, some jars of preserves, recipe books. 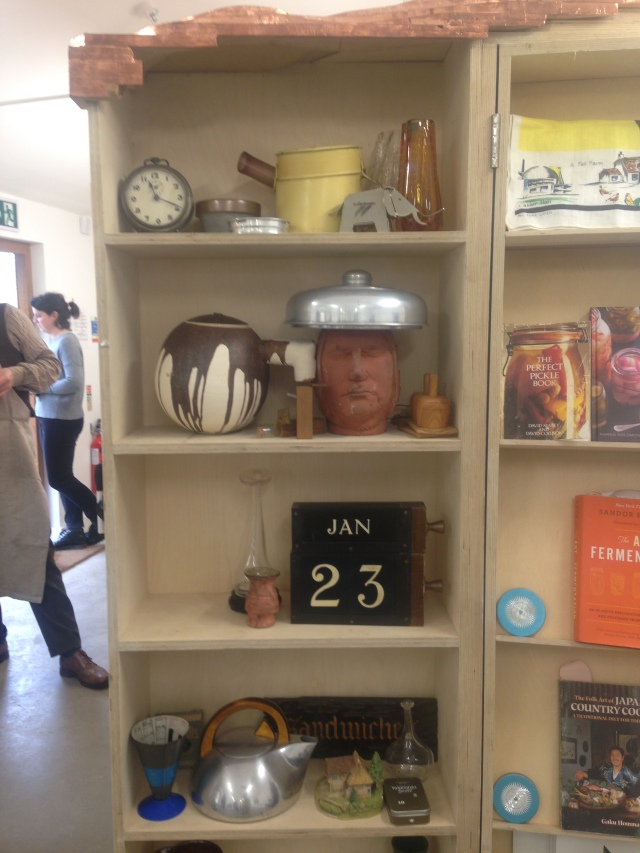 Some of the objects on the outside have been specially created for use and enjoyment in making or using the preserves (preserving jars, small Japanese-inspired bowls, salt and pepper pots made to look like eyeballs, a plastic spoon made from milk protein).  Others we have in our own homes, or recognise from our parents’, grandparents’,or aunts’ homes.  Others are less obvious and more puzzling.

The gorgeous undulating copper roof, like the contours on a good map, reflect the landscape where Karen Guthrie and Grizedale Arts are based, in the Lake District.

This was the fourth outing (I think) for The House of Ferment.  It was originally commissioned for the Science Gallery in London (a collaboration with Kings College London at the Guys Hospital Site in Bermondsey, where the Science Gallery will have a permanent home next year).  It has also travelled to Japan and Poland, and the influence of both those cultures was evident in Karen’s workshops and presentations during the day.  This weekend was hosted at an art gallery in Bruton, Somerset, and so reflected the local food culture, with presentations from three local food producers.

Karen described their stay in Japan and how she learned about rural Japanese food growing and preservation from villagers.  She introduced us to a range of Japanese fermented food products by smell, by viewing, and best of all, by tasting.  She described how she had made each of them, and I for one came away feeling confident that I can now start to have a go myself.

For what’s the point of growing abundant food if we don’t do everything we can to ensure that none of it goes to waste?  And these age-old methods of preserving abundance are (or should be) central to avoidance of waste.

I was also lucky enough to stay on for a workshop session on sourdough by local (Bath) baker Duncan Glendinning – I’ve bought his bread before and know it is delicious, so I was keen to learn what I could from him. 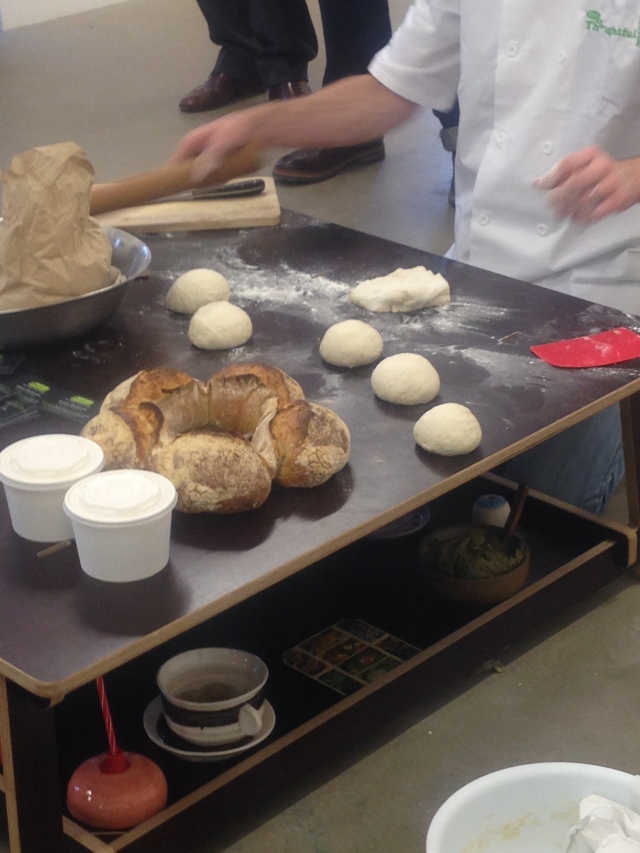 And then an intriguing session with the Wild Beer Company (another local food producer) on ‘clean and dirty beer’ – their way of expressing the difference between carefully controlled uniform brewing yeasts (‘clean’) and the wild yeasts they experiment and brew with (‘dirty’).  They were very different, and it was a really interesting introduction to something I knew nothing about.

A theme that repeated itself throughout the day, in each of the presentations, was the importance of TIME as an ingredient in fermented foods. Not just the time we use, but the time we give them (allow them) to develop and grow. And also the importance the small personal (biographical, artistic) touches we add of ourselves – I was particularly struck by Duncan talking about the difference made by the decorative finish of a loaf. Not a difference in the taste of it, but a difference in the pleasure it gives – the added visual delight.

I love it when a host of seemingly disparate interests and ideas come together in a way that melds seamlessly into something new, and this is what happened for me at The House of Ferment.  It brought together (in no significant order) my interests in:

Last year, while we were in the Black Forest, Malcolm and I had a fascinating day out visiting the local Museum of Rural Life.  I was intrigued by the small domestic details, the storehouses, the pantries, the outdoor running-water ‘fridges’, the ovens, the preserving pans.  The same pleasure I’ve had a similar sites in the UK – for example, the Geffrey Museum in London, where I spent many happy Saturday mornings as a child; the museum of rural life at St Fagan’s near Cardiff; Blists Hill Victorian Town at Ironbridge. 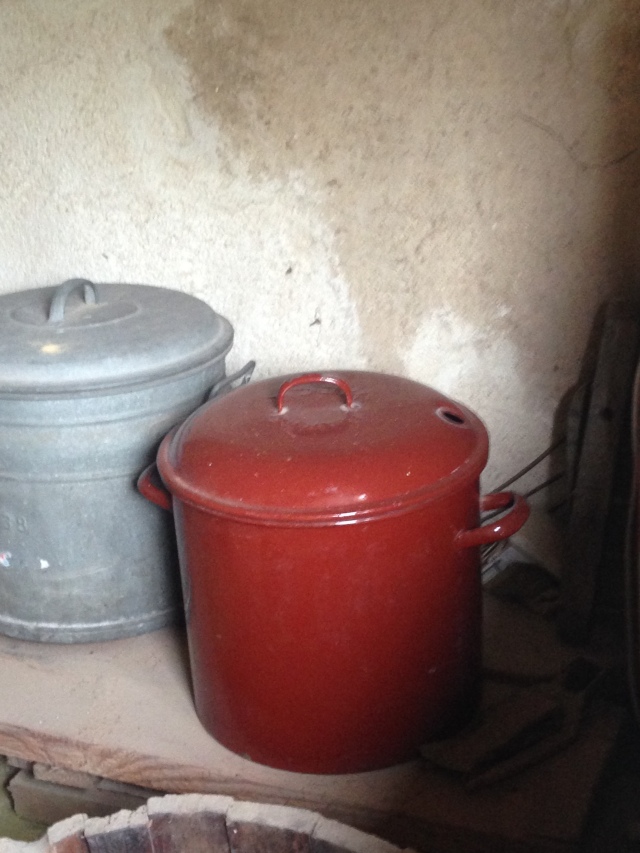 Through oldest son, who is a great taster, experimenter, and creator of new (to us) foods, last year I became interested in trying and making sauerkraut, kimchi, and other fermented pickles.  I acquired a German sauerkraut pot on Freecycle.  I bought a couple of recipe books in the Oxfam bookshop.  After Karen’s presentations I’m ready to have a go.  (If you want to explore the art of fermentation further, I’d really recommend Annie’s blog, KitchenCounterCulture – and I love the wealth of meaning in her blog title).

Following Duncan Glendinning’s talk, I’m going to alter my sourdough so that I will have two – a wheat one and a rye one – and use them for their respective types of bread instead of mixing it up as I do now.

Last year I watched two TV programmes made by Hugh Fearnley- Whittingstall on food waste.  I thought I already knew about the levels of waste within the UK food chain, but even so I was horrified and sickened by what I saw, all the more so in the context of knowing that more and more people in the UK rely on handouts from food banks to be able to eat.   Once a week, at a local project I’m involved in, I along with all the other volunteers and workers eat lunch based largely on food from Fareshare – i.e. food ‘waste’ – so I know first hand just how good this stuff is.

We waste almost nothing in our kitchen at home.  But this year, one of my missions is to ensure that all the food I produce at home (in the kitchen, on the allotment, in the garden) is either used straight away or preserved for future use.

I’ll keep you posted on how I get on.