Well I finally did manage to get out there and do a few things in January, in the odd moments between the downpours.

I moved most of the fruit bushes up to the Orchard Plot, which I’ve dug over ready for some new fruit bushes to join them.

I’ve planted out the broad bean plants, and soon the peas will join them.

I’ve sown some tomato seeds in the greenhouse – probably far too early, but time will tell.  I do have some more seeds in case those early ones don’t germinate.

The onion sets I put in during the autumn are doing well, and so is the garlic.

I’ve succeeded in training the hens to return to their run when I rattle a box of mixed corm, which means when I’m out there working I can now let them out to scratch around on the surrounding grass and leaves – so much nicer for them than their muddy pen. 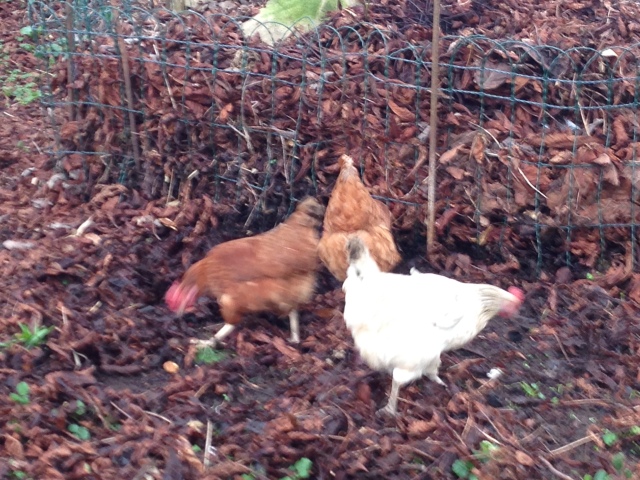 The hens have had some unexpected house-guests, when my neighbours had a fox in their run and needed some temporary refuge for their remaining hens until they could mend their fencing.  Despite the disruption, they continue to lay exceptionally well, and I’m giving quite a lot of eggs away.  Its nice to know they are appreciated and enjoyed.

The photo below is because I’m trying to figure out which hen lays which eggs.  This one was just seconds old.

One day when we had 6 egg whites in the fridge and a meal out at friends when we’d offered to take a pudding, a chocolate walnut meringue cake was made which coincidentally needed – 6 egg whites.  It was delicious! (it was also December, not January, but who cares!).

I collected my seeds and onion sets from the Allotment Association, and am expecting to hear soon that the seed potatoes are there to be collected.  I also found some bargain seeds on sale in Waitrose – organic seeds at 50p each, or three packets for £1!  As their use-by date is the end of 2017, these really are a bargain (just this weekend, so you may be lucky enough still to find some).

Add in a little light weeding and some relaxing catalogue browsing (I need to order those fruit bushes and some asparagus roots), and that just about wraps it up for January.  But an ecouraging start to a new gardening year – so far.

Now I've passed 60 I'm still doing all sorts of things I haven't done before, as well as carrying on with the things I already love. I live a happy life with my long term love Malcolm. In my blog I explore local and low tech ideas, food, growing, making, reading, thinking, walking, and lots of other words ending in 'ing'.
View all posts by deborah @ the magic jug →
This entry was posted in Allotment, Food, Growing, Local food and tagged Allotment, Food, Gardens, growing, Growing food, hens, Local food, Simplicity. Bookmark the permalink.