I had already written the rest of this post, but I was struggling with what to write under this heading.  I needn’t have worried.  There is now only one subject worth writing about.  The forthcoming General Election.

I have listened to all sorts of voices in the past 10 months or so, and learned much.

Really?  I thought that one of the greatest strengths of a parliamentary democracy is that there is an effective opposition in parliament to test and debate and check Governments.

“In recent weeks Labour has threatened to vote against the deal we reach with the European Union.

“The Liberal Democrats have said they want to grind the business of government to a standsill.

“The Scottish National Party say they will vote against the legislation that formally repeals Britain’s membership of the European Union.

“And unelected members of the House of Lords have vowed to fight us every step of the way.

I found this statement chilling – especially following so swiftly on the heels of the (probably fixed) election in Turkey.  Why not go the whole hog as Trump did and phone Erdogan to offer her congratulations.

Because to oppose is precisely what opposition parties are for – including representing the 48% of voters who voted to remain in the EU.

Look away now if you’re not comfortable with reading about politics, because for now, for this brief period of time, there is nothing more important.

I have been a Labour Party member (twice).  I have voted LibDem.  I am now a Green Party member.  But none of that matters right now.  For now, for this moment, for me, nothing trumps removing this increasingly hard-line right wing doctrinaire government and working towards bringing to power a centre left government.  Trying to secure a future that reflects our best selves and the best of British values.

We can only do this by working together and setting aside our personal party political preferences, and voting for whichever centre/left candidate has the best chance of winning.

So in the coming weeks I will be in touch with all our local candidates (other than the sitting Tory MP) and putting them on the spot about this, and trying to extract a pledge that their parties will listen to those of us arguing for this and for a better future for my children, your children, for you and for me.

I’m hoping that this time, they will listen to me and others like me.

Everything else I have written below was written before yesterday’s surprise announcement.

My goodness this has been a tough month for that.  How to take control when so much horrible stuff  that we can do nothing about is happening all around?  Particularly with powerful politicians posturing and strutting with their bombs of all types (‘mines bigger than yours‘); and individual terrorists attacking ordinary people.  Plus I’m still reeling from feeling in March that the clocks simultaneously went forward an hour and back about five decades.

But.  Life does go on (for those of us fortunate enough), and indeed we have to make sure that it does, and that while it does, we do the things within our power to make sure things are as good as they can be.

So.  This month I want to focus on supporting people at risk of deportation.  This means a lot to me, for a whole range of personal reasons: 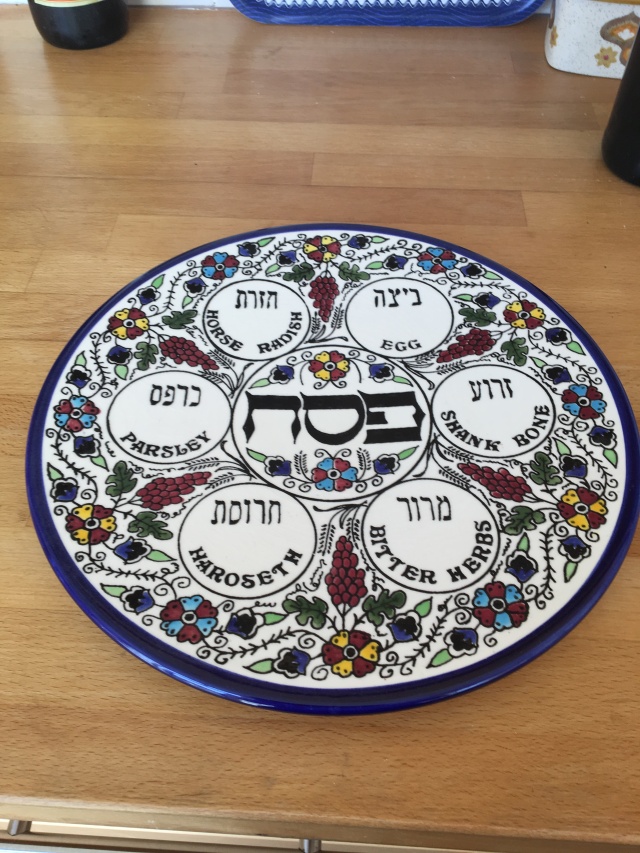 So – I have signed petitions in support of people who, having lived here for many many years, contributing to our communities, have suddenly and apparently randomly been singled out for deportation.

Abdul Hassan – an 18 year old who was brought by his parents to London aged 5 and left living with his aunt, where he remained following the death of his father and his mother’s  mental ill health.  He achieved excellent A levels and was offered a professional apprenticeship by KPMG, but instead his application for ‘leave to remain’ has been rejected by the Home Office, and now he is appealing against that refusal.  His appeal will be heard on June 8th, so there’s still time to sign the petition supporting him if you feel moved to do so (click on the link above).  It will mean a lot to him to have many people showing their personal support for him.

Stoly Jankovic – he came here when he fled Yugoslavia in 1991 to escape from the war.  He’s lived in the UK for 26 years.  For the past 15 years he’s worked in a whole food store in London, paying his taxes and NI.  Below is an extract from the Guardian article where I first read about him:

For the past 10 years, he has signed on every month at an immigration reporting centre in London Bridge, Grayson [his employer] told the Guardian. “Last Thursday afternoon, he went down there, and instead of signing a piece of paper, they locked him up and put him in a van, with no warning at all, so he only had the clothes he stood up in,” he said.

“It is a horrible shock. He is a very integral member of the community in Kentish Town, very popular, and very well-liked. It has made a lot of people very, very angry that this could happen so arbitrarily,” he said.

Speaking from the Verne immigration removal centre in Dorset, Jankovic said: “I am mortified about losing my life.”

“I see myself as completely assimilated. I don’t know what more I can do in that respect. This is my neighbourhood, my culture,” he told the Camden New Journal, which first highlighted his case.

Was it a coincidence that, after 10 years of signing on monthly, he was arrested without prior warning the day after Article 50 was triggered?  Maybe, maybe not.  But what does seem to be true is that more and more of these kinds of decisions are being taken – in our name – usually against people expected to be unable to fight back.

Remember, these are the people we’ve heard of.  Many many more have simply disappeared on flights you and I know nothing about.  And this will carry on happening.  In our name.

Each time I read of one of these incidents, I think of how I would feel if it were my son, my mother, my friend.  Me.

And if you’re questioning whether these petitions achieve anything beyond a ‘feel good’ for those of us who sign them, well I think they do.  Because this kind of state behaviour (in our name remember) seems not to stick under the bright light of publicity.

As a result of the publicity around his situation (including strenuous representations by his MP Keir Starmer), Stoly Jankovic has been given two weeks in which to make his case for being allowed to remain here.  The same has happened to others for whom there was publicity.

Does this affect how others are treated in future?  I have no way of knowing.  But what I do know is that it certainly makes a difference for those individuals whose cases are picked up, and that matters.  It matters a lot.

I’m going to follow in the footsteps of Plot34 over at Allotment Life and talk about giving stuff away.  I expect you’re familiar with Freecycle and Freegle – if you’re not, they are online local ‘noticeboards’ where you can ask for things you need, or offer things you don’t need.  All free of charge.

I use our local Freegle group a lot.  I’ve been the happy recipient of some beautiful primroses, snowdrops in the green, two very healthy rhubarb crowns, a good-as-new compost bin, and a top-of-the-range worm bin for youngest son’s tiny garden.  Over the years we’ve given away all sorts of things.  Just this week this included the shed my allotment neighbour had given me that I decided not to use after all – it’s gone to someone who is using it to make a sturdy hen house; my tiny tool shed has gone to someone who wanted exactly that; and the tractor tyre we inherited 25 years ago from our childminder has gone to a local infants school for their ‘wild outdoor space’. 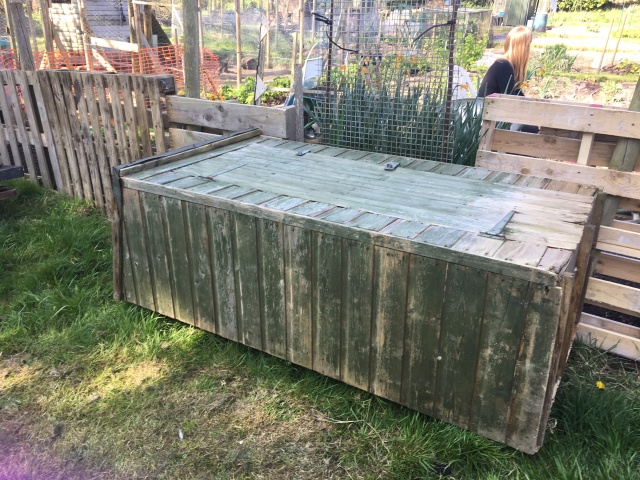 And through it all you do kind of ‘get to know’ local people you might not otherwise have come across.  Building community indeed.  And of course at the same time saving more ‘stuff’ from landfill, and therefore helping to …….

4, LOOK AFTER THE PLANET

Well I suppose this month the biggest thing I’ve done under this heading is all the work on my allotment and garden.  Improving them, weeding, tidying, and generally making them ready for another growing year.  And quite a lot of how I’ve done it could equally come under the ‘build community’ heading, because when we improve how places around us look, that does have a knock-on effect on how people feel about the place when they walk by or through.

Along the way I have sorted through a lot of ‘stuff’ on my allotment, to sort the genuinely useful (or decorative) from the rotten, outgrown, or simply no longer useful to me.  I am determined that my allotment and garden should look good as well as be productive.

And we are making good progress on improving our front garden.  It will take a while to be how I want it to be, but it has come on a long way since I first wrote about it.  I have planted some edibles (Chilean Guavas – delicious!, Japanese Quince – to be used for quince jelly, an aromatic shrub).  I’ve grown hollyhocks from seeds I collected around my neighbourhood.  I’ve taken split plants in the back garden and saved self-seeded plantlets.  I’ve planted two roses, wallflowers, and tulips.  It is starting to look good.  It will look much better by this time next year.  Most important of all, I’ve begun feeding and improving the soil, which was poor thin stuff after years of neglect.

Phew, that was heavy going!  to soothe your brow and lighten the load, and reward you for reading down this far, I hope you enjoy there photos from a recent visit to Heale Gardens in Wiltshire.

Now I've passed 60 I'm still doing all sorts of things I haven't done before, as well as carrying on with the things I already love. I live a happy life with my long term love Malcolm. In my blog I explore local and low tech ideas, food, growing, making, reading, thinking, walking, and lots of other words ending in 'ing'.
View all posts by deborah @ the magic jug →
This entry was posted in Community, Reflections on life (and death), Uncategorized, Whatever next? and tagged Allotment, Build community, Community, Coping, Deportations, General Election, Listen, Living, Look after the planet, Reflections, Seder, Take control. Bookmark the permalink.