It’s been a few years since I made marmalade, mainly because I made far too much last time around and in the meantime several kind friends and relatives gave me some of theirs (a special mention for the grapefruit marmalade made and given by my sister, which was just The Best).

And now I’ve taken stock of the stocks and see that, in a very timely way, I have no more marmalade left.

I’ve used the same recipe for the past decade or two.  You can tell because the recipe card is so obviously well used. 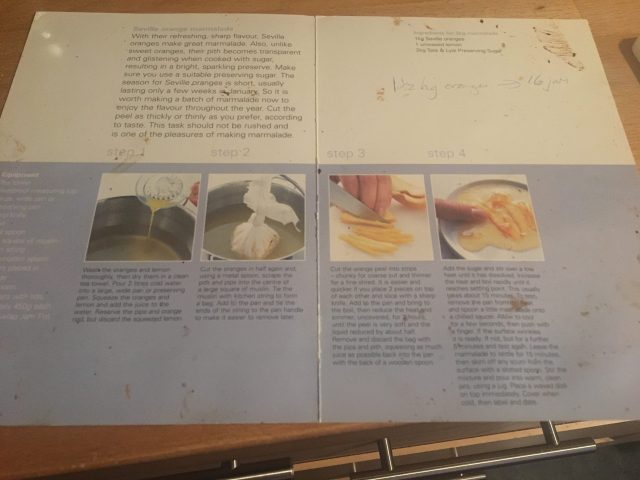 It couldn’t be more simple.  1K of seville oranges, (= 9 oranges), 2k of sugar, 1 lemon, some water.  Use the stash of jars I have squirrelled away in our garage (note to self: there are way too many there: I must sort them through and give some away).  I prefer to use smaller jars rather than larger ones, as we don’t eat a huge amount of marmalade, and it takes a while to get through a jar.

In fact, let’s be clear, I’m the only one here who likes it, and really, I shouldn’t be eating my way through 2k of sugar.  Especially not when I’ve decided I need to lose a stone.  I’ll give quite a bit away to friends and relatives, and the rest will probably last me a couple of years.  (Or not – time will tell).

So – this uses the last of the 8 lemons I bought last weekend, plus the 9 seville oranges I bought a couple of days ago.

One evening I squeezed the oranges and the lemon and added the juice to the 2 litres of water I had already put in the saucepan.  I collected the pith and pips from the oranges, including scraping the pulp away from the orange peels, into a piece of thin cotton muslin, which I then tied up into a ball with some kitchen twine and tied to the saucepan handle (for ease of removal later in the process).

The recipe called for me to discard the lemon peel.  So before squeezing it I removed the zest and set this aside for using(maybe in salads – it really zings them up).

The most time-consuming part of the whole process is slicing the orange peel before adding it to the liquids.  You could regard this as either tedious or meditative, depending on your disposition.  I choose the latter.  I have some real areas of fussiness, and one of them is that I like the peel in my marmalade to be sliced thin and even.

Once that’s done, I brought it all to the boil and left it to simmer for 2 hours.  This softens the peel, reduces down the liquid, and releases the pectin from the pips and the flavour from the pulp.

I then covered it overnight to finish off the next day.  When I’ve been more pressed for time, I’ve sometimes left it at this stage for several days, with no bad effects.  I think you could probably also freeze it to finish off later.

The next step, making the marmalade, is quick to do (about half an hour, all told), if as I did you have already assembled and washed clean all the jars you’ll need for bottling the marmalade (and a few extras just in case).  I simply added the sugar, brought it gently all to the boil stirring, and then when it came to the boil let it boil vigorously until my jam thermometer showed that it had got to the right temperature.  I skimmed a bit of foa,y stuff from the top (using a slotted spoon).  Then I ladled it into my jars, put the lids on tight, and left it to cool.

These ingredients made 11 jars plus a tiny jar plus a bit left over that I’ve kept to use first.  I also kept the foamy stuff from the top, which I plan to use in some kind of orangey sauce for something some time (duck breast?).  Once you start to think about zero waste, ideas keep coming.

Don’t forget to label (including the month and year you made it – you think you’ll remember, but you really won’t).

I like to use the tiny jars, they’re nice to use on a picnic (eg as part of a picnic breakfast on an early morning train).  If you want some, try asking a local b and b or hotel for some of their throw-outs.

Useful things to have for marmalade making:

A tip: wash and clean everything as soon as possible after you finish.  If you don’t some of the residue will dry hard and be tough to remove.  Do it quickly and it will be easy.

Now I've passed 60 I'm still doing all sorts of things I haven't done before, as well as carrying on with the things I already love. I live a happy life with my long term love Malcolm. In my blog I explore local and low tech ideas, food, growing, making, reading, thinking, walking, and lots of other words ending in 'ing'.
View all posts by deborah @ the magic jug →
This entry was posted in Do what you can with what you have, Food, Frugal, Uncategorized and tagged Food preservation, Frugal food, marmalade, Simplicity. Bookmark the permalink.