What I did and didn’t do this summer (garden, allotment, kitchen update)

As ever, lots of good intentions, and the expectation of a quieter, simpler summer this year.  Wherever did that idea come from?  Life has been as busy as ever, and punctuated by three unseasonal cold/flu viruses.  All reasons (not excuses, ever) for not managing to achieve everything I intended (hoped) for this season.  And yet, I’m really pleased with what I did achieve and what I learnt.

My garden (back and front of the house) has really started to come together and has begun to resemble what it looks like in my head.  I gave myself a shock when I explained to someone that I’m finally getting the front garden together, and the question came “oh, how long have you lived there?”.  When I realised that “since 2001” wasn’t the expected answer in 2019, it made me think it’s time to just get on with it.  And I have.  Several times when I’ve been out there working people have stopped to compliment me on it or ask questions about some of the plants.  Not something that would ever have happened before.

Getting the fences back and front replaced over a period of several years has been the spur to redesigning and replanting the beds.  Now I know where the gaps are, and how I want to fill them.  I know which plants don’t work for me where they are at the moment, and which  ones thrill me each time I see them.  I have bought a few key plants, but mostly have been able to spilt existing ones from one garden to plant in the other.  I’ve only used shrubs and perennials, to keep costs down.  I will add some more spring flowering bulbs this autumn, and I also plan to plant two fruit trees in the front garden, probably apples but maybe pears.  If I can figure out how to get it out of its current pot without smashing the pot, a bay tree will also be planted there.  I will post some photos as I go.

I’m now eating my crop of Chilean guava fruits (ugni molinae) – some each day on my breakfast cereal.  These are small fragrant berries with a taste unlike anything else.  I love them, and have a good crop from the three bushes I planted in the front garden.

On the allotment I’ve been scaling down and reconfiguring, reflecting the fact that we are now mostly only two (and one of our sons and his family will shortly be moving to a community that grows much of its own produce, so I will no longer be giving home-grown food to them).

I’ve reminded myself that it’s only ever worth growing food that we’ll actually pick and eat (obvious? you’d have thought so but……); that we can only eat so much even of those things we love; that we don’t both love the same things; that while I can preserve some things, there’s still only so much we can eat.  My plan is to continue to grow a smaller amount of a wider variety of things we enjoy eating.  Also to plant more top fruit and reorganise the soft fruit slightly.

The first weekend in October was picked as the one for oldest son and his partner to come over and help us move the greenhouse from a place in the garden where it gets almost zero sun to the allotment, where it will get full sun and be more productive.  That in turn has release the perfect space in the garden for some storage and increased rainwater harvesting (an important part of my drive to reduce my mains water use).  I am thrilled with the result, and can’t wait to get out there and start planting and sowing seeds (first off will be my autumn-sown broad beams, which gave us a great crop this year).  My plan is to use the space to grow winter salads to begin with.

We visited several gardens, which as always provided ideas for next year.  Walled gardens seemed to be a particular theme.  Heale Garden is a favourite, and somewhere we try to visit each month during the spring and summer when they’re open.  Malcolm goes around the garden photographing and making videos, while I sit and knit or crochet and contemplate in the kitchen garden.   This year we also visited Forde Abbey, where the kitchen garden was superb.  We had a brief visit to Barley Wood Walled Garden near Wrington, which was a revelation.  Finally, going to Charles Dowding’s open day was both a delight and an inspiration.

The glasshouse with gourds at Forde Abbey 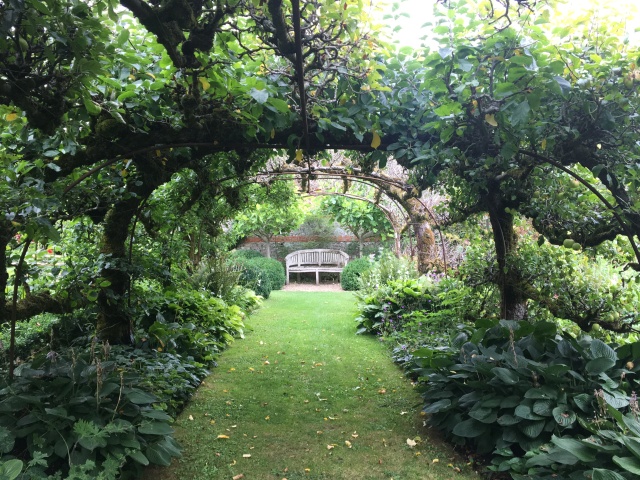 View from the Walled Garden at Wrington

In the kitchen I haven’t managed to find the time/energy to do much preserving, despite my best intentions.  I made a small amount of jam (strawberry, raspberry), but truth to tell we’re still eating jam from last year (and the year before….).  I didn’t get round to bottling anything.  I have frozen a lot of raspberries and I know that we will really enjoy eating them.  I hope to collect some apples from the community orchard in the middle of our allotment site and preserve some of them – as puree, and as dried apple rings.  If I do so, I may also have a go at making some apple vinegar along the way.  Although we don’t need this for food use (yet), I would like to try using it for cleaning purposes.  Again, I’ll keep you posted on any progress.

One thing is for sure: life is change, and change is life.  And just in case you needed a reminder why all this growing and earth care is so important, here it is. 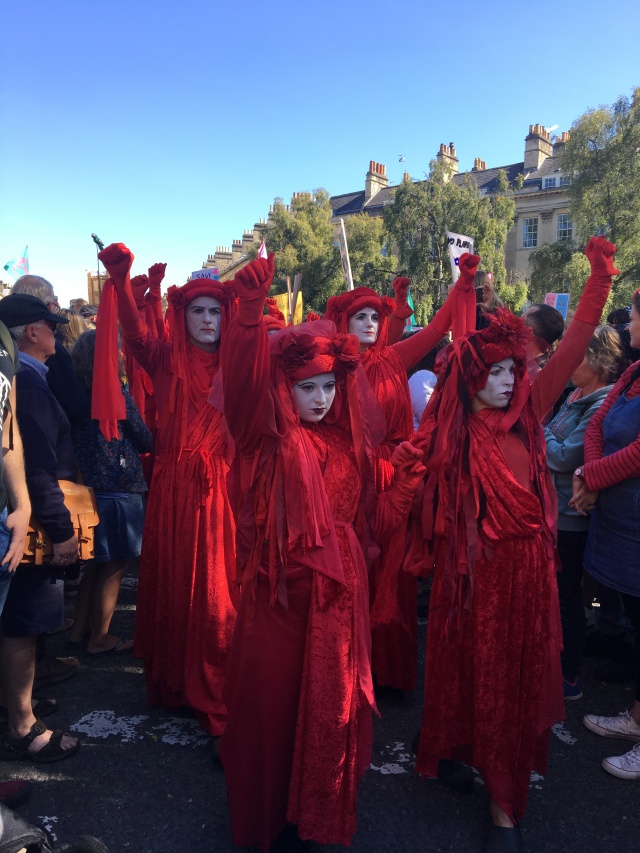 Now I've passed 60 I'm still doing all sorts of things I haven't done before, as well as carrying on with the things I already love. I live a happy life with my long term love Malcolm. In my blog I explore local and low tech ideas, food, growing, making, reading, thinking, walking, and lots of other words ending in 'ing'.
View all posts by deborah @ the magic jug →
This entry was posted in Allotment, Do what you can with what you have, Family, Food, Growing, Local food, Uncategorized and tagged Allotment, Barley Wood Walled Garden, Charles Dowding, climate emergency, Extinction Rebellion, Family, Food, Forde Abbey, Gardens, growing, Growing food, Heale Garden, hens, Local food, walled gardens. Bookmark the permalink.

2 Responses to What I did and didn’t do this summer (garden, allotment, kitchen update)