And here we are again on the weekly merry-go-round back at Saturday.

A very different day from last Saturday – from my perspective, enjoyably cooler and showery (so no need to water anything apart from the greenhouse plants).  Sadly an outdoor coffee meet-up with a family member was off the cards.  We’ll see whether tomorrow’s planned family get-together can go ahead or not.

But.  We’re still (not) in Germany this weekend, so I decided to embrace the weather and go down to the Farmers’ Market.  I’m so glad I did.  They’ve made such an impressive effort to ensure everyone’s safety, and given the effort they’ve made to be there, the least we could do was spend some of our money with them.

We very much enjoyed the special tomatoes I bought last week from the Isle of Wight stall  so I bought some more today.  I baked a couple of French sticks which we’ve deliberately allowed to get slightly stale, and tonight Malcolm will make bruschette for our supper.  Some with tomato, garlic and basil; some with goats cheese and walnuts.  Nothing German about that! I hear you say.  Well, that’s what’s nice about making the rules: you get to break them too.  [As I type this, I can almost hear Mr Toad in the beanie hat saying that to himself as he drives off to Durham.  Or Barnard Castle.  Or wherever.]

I also visited the sewing shop in town, and treated myself to a replacement pair of pinking shears.

The rest of the day has been filled with whatever took my fancy.  I made the additional face coverings a neighbour had asked for.  I cut out fabric ready to make more next week.  I finished knitting yet another baby ‘surprise’ jacket, to sell for Bath City Farm.

I think you can probably guess what I found hiding in plain sight when I sorted through the fabric.  Of course – the missing pinking shears.  Which, it turns out, are considerably smaller than in my memory, and black not orange (unlike the sewing scissors below).  Quelle surprise! 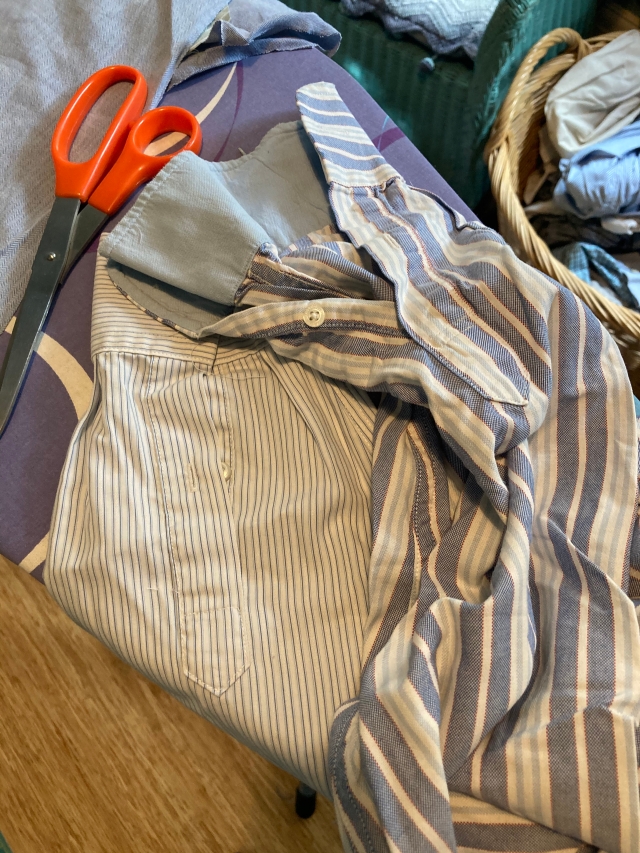 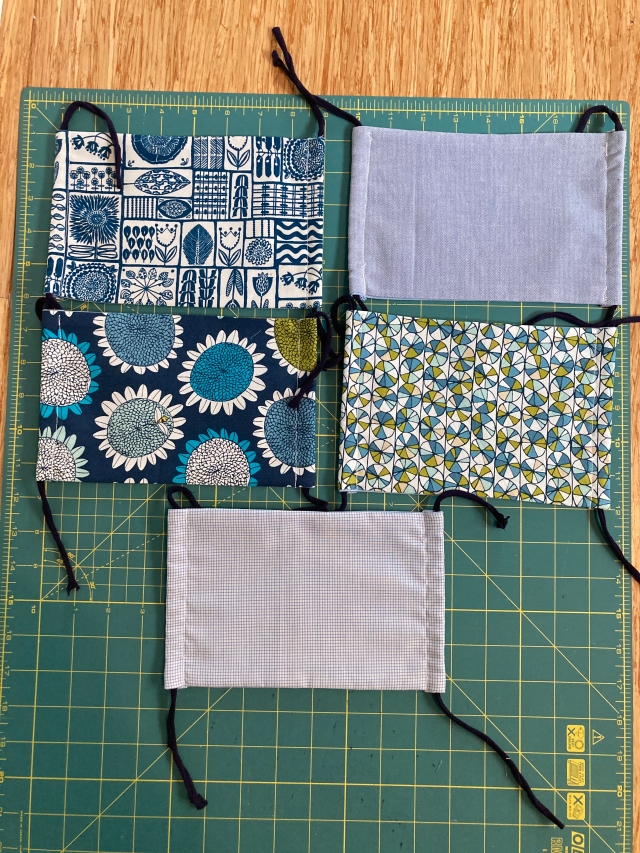 I did some food shopping in our very local shops, just because I could.  Salami from the Italian deli – we’ve known the people who own and run it for decades, and it would feel tragic if they didn’t survive this – they’ve worked so hard, and are an important part of our community.  Various bits and pieces we’ve run out of from the Co-op – they’ve been amazing in re-organising their shop so as to be safe in these times, including making sure that the shelves were fully stocked even as bigger supermarkets ran out.  And, mainly for the pleasure of being able to, the little gift shop run by a woman artist who only opened her shop a year or so ago but has already become part of the community – I want to buy a houseplant to replace the one I inadvertently killed this week (well, obviously inadvertently).  She said she’ll have a bigger selection on Monday or Tuesday, so we agreed I’ll pop in on Wednesday morning.

A brief inspection of the allotment yielded another courgette (number 3), eggs collected, and tomatoes growing nicely.  I admired my second attempt with sweetcorn – this time I’ve used a more secure way of keeping the hens out, which so far has worked.  Fingers crossed.  The 3 plants in with them are squashes, the old pallet for the squashes to climb up.  I haven’t tried that before so we’ll see if it works.   I brought home a small pot of basil to go with supper (no head within I hope*). 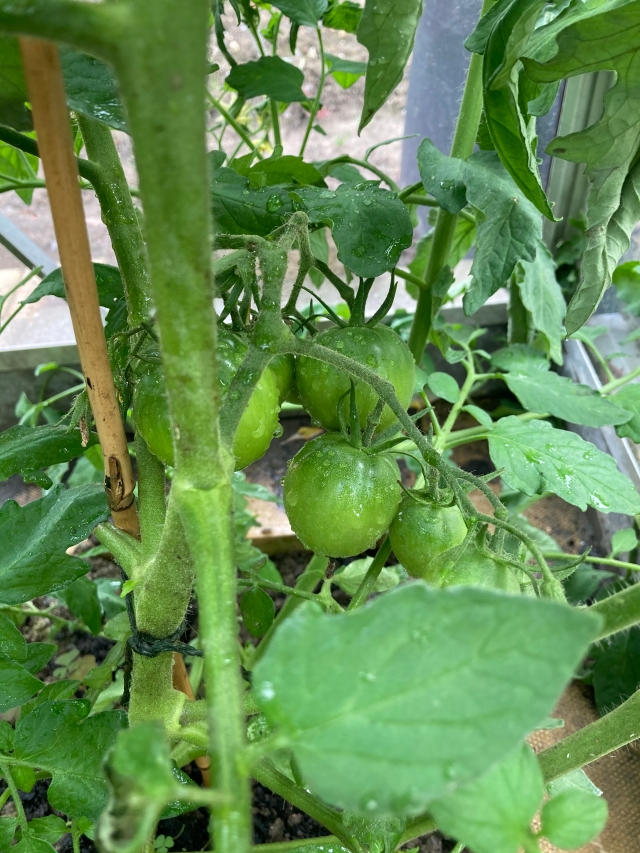 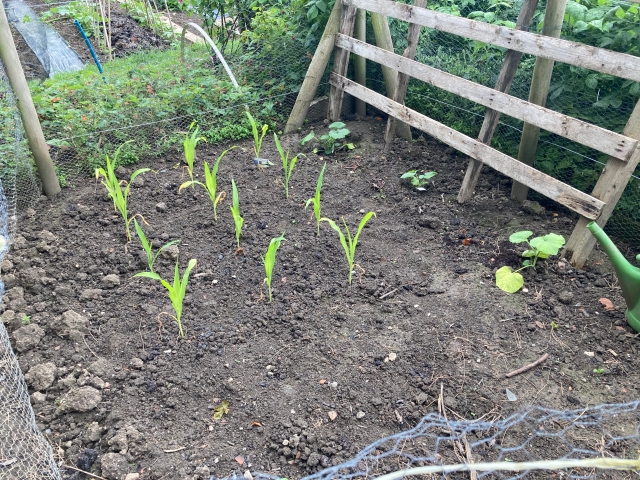 As we’re still (not) in Germany, you can guess with no difficulty where our Sunday morning coffee trip with be.  I hope you’ll be able to join us xx

*reference to a poem by Keats (Isabella, or the pot of basil).  I seem to remember having to read it when I was at school, and finding it decidedly odd.  But then I found lots of things at that school decidedly odd.  I moved there when we moved to Bath from London (into the last intake of a mostly white girls’ grammar school, from a very multi-ethnic mixed comprehensive school), and was in shock for about 2 years.

Now I've passed 60 I'm still doing all sorts of things I haven't done before, as well as carrying on with the things I already love. I live a happy life with my long term love Malcolm. In my blog I explore local and low tech ideas, food, growing, making, reading, thinking, walking, and lots of other words ending in 'ing'.
View all posts by deborah @ the magic jug →
This entry was posted in Allotment, Community, In the time of the virus, Poetry party, Reflections on life (and death), Travels and tagged Black Forest, face coverings, Growing food, home made face coverings, knitting, lockdown, sewing, Travel, Virtual travel. Bookmark the permalink.