Sunday again.  Plans for an afternoon garden get-together were abandoned, for several reasons but the main one was the very changeable weather.  Tea in the garden not such an appealing proposition when it’s intermittently pouring with horizontal rain then sunshiny but both unpredictably.

Instead we had a pleasant quiet day.  Both of us have more than enough to keep us happily occupied and entertained.  Books, photography, cooking, sewing, knitting, listening to the radio.  Neither of us tire of these.  In between the heavy showers there was an opportunity to pop out to the allotment, just enough time to bring in onions for tonight’s supper, and eggs.

For our Sunday morning trip Malcolm baked some more of his cinnamon buns (I could get used to this) and we revisited several parts of Germany: 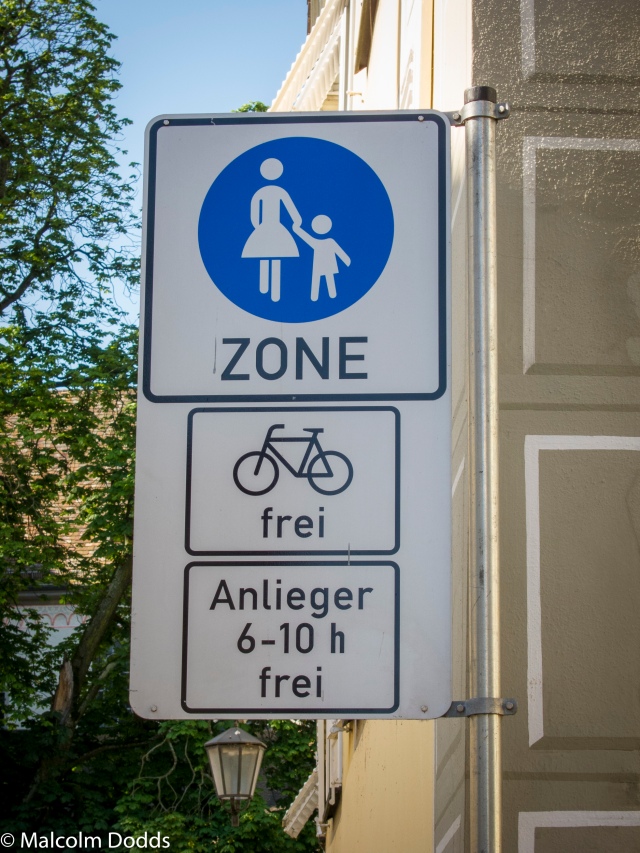 Our meal this evening was another German-inspired meal.  On our trips to the Black Forest and to Strasbourg we’ve enjoyed the local flammenkuchen (or tarte flambée in France).  Kind of like a very very thin pizza, with the topping made of lots of thinly sliced onions, creme fraiche, and some speck.  I made the dough using my sourdough starter and rolled it out extra thin.  The topping was made from allotment onions, with a couple of rashers of bacon as I couldn’t get hold of any speck.  With a glass of chilled white wine, we could almost imagine ourselves there.  Even the weather was appropriate (wet, windy and changeable.  As it often is there). 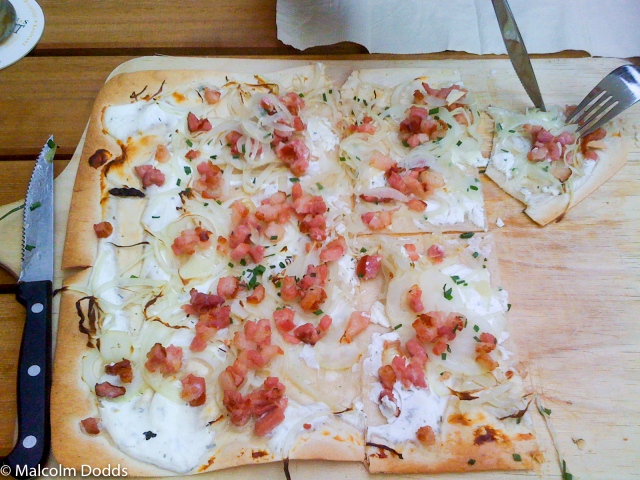 This was the original… 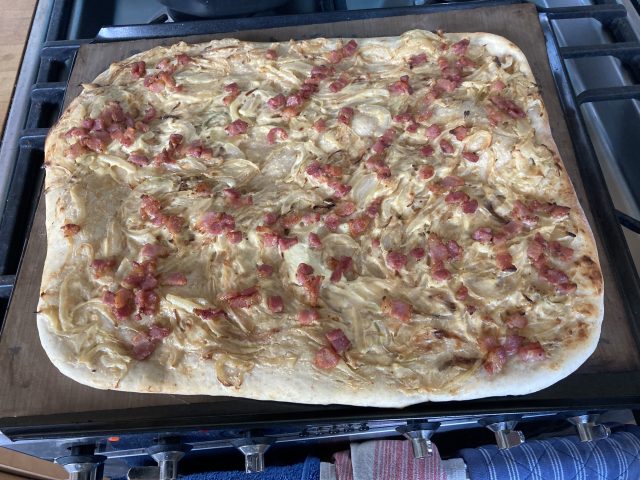 ….and this was mine. Not perfect, but not bad at all

Now I've passed 60 I'm still doing all sorts of things I haven't done before, as well as carrying on with the things I already love. I live a happy life with my long term love Malcolm. In my blog I explore local and low tech ideas, food, growing, making, reading, thinking, walking, and lots of other words ending in 'ing'.
View all posts by deborah @ the magic jug →
This entry was posted in Climate change, Cycling, In the time of the virus, Inspirations, Seeing differently, Travels and tagged Active travel, Black Forest, cinnamon buns, Cycling, Flammenkuchen, Freiburg, Germany, Rhine cycleway, Travel, Vauban, Virtual travel. Bookmark the permalink.