In the time of the virus: to wear or not to wear, that is the question – face coverings

Here’s a topical subject, and one that seems to raise strong feelings in people one way or another.

I’m not going to sit on any fences here: originally I knew nothing of the subject, and now I’m fully persuaded of the benefits of wearing face coverings in public indoor spaces.

It seems to me the perfect altruistic act of solidarity: mine protects you; yours protects me.

I should start by saying that I never before understood the Chinese and other tourists I saw routinely wearing face coverings when out and about, and to my shame I even thought it rather rude (did they think I was going to give them some dread disease?).  Now I know better.  The learning in those countries that really suffered from the outbreaks of SARS and MERS was that mass wearing of face coverings really did help protect the community as a whole.

I know that SARS and MERS were different infections with different transmission vectors and patterns.  I also know that generally evidence of the success or otherwise of face coverings is from real life observations, not from the kind of randomised trials with control groups and all the other stringent tests we normally expect of evidence-based medicine.  But there are circumstances and times (and now is one such) when we need to do things we might not have considered in other times.

My growing mistrust of the UK government’s handing of the corona crisis has led me to follow several eminent public health academics and clinicians on Twitter, and read as widely as I can manage around the subject, to inform myself.

Some of these people also write articles for lay people like you and me.  Here’s one from the Director of the London School of Hygiene and Tropical Medicine (Frofessor Peter Piot – he co-discovered Ebola, as well as worked on HIV and Aids for the UN.  Professor Tricia Greenhalgh (she’s Professor of Primary Care Health Sciences at Oxford University) – follow the link to find several articles she’s written about use of face coverings.  She began with no firm view on the issue, and now is a strong advocate for wearing them.  Professor Devi Sridhar holds a Chair of Global Public Health at Edinburgh University and is one of the experts advising the Scottish Parliament on dealing with the pandemic.  She has clear views on how to suppress the virus with a view to eventually eliminating it – the route they’re following in Scotland.  Her views and the views of all the public health specialists I’m reading contrast sharply with the actions taken (or not taken) by the UK government.

Like me, I’m sure that recently you’ll have noticed too many discarded plastic gloves and single-use face coverings littering our street, parks and open spaces.  I came across an interesting article published by UCL Plastic Waste Innovation Hub about the environmental impact of non-medical use of single use face masks.

Which brings me back to where I began.  It’s my belief that the government has effectively returned to the discredited ‘herd immunity’ approach which they espoused and then tried to pretend they hadn’t in the early days of the pandemic hitting the UK.  Whatever they may say, what they’re doing and how they’re doing it seems to me to point that way, whether by intention or not.  And so, however much and however fervently I wish it were otherwise, we seem sadly to be back to relying on individual actions to quash the pandemic.  What I do protects me and protects you.  What you do protects you and protects me.

If you’re not already doing so and have the means to do so, I hope you might consider making and using cloth face coverings.  If you’re not sure where to start, here’s a link to my blog post explaining how I’m doing it.  There are plenty of other patterns freely available on the internet, and several that don’t require any sewing, skills or materials other than an old t-shirt and the ability to use a pair of scissors.

After I’d written this post, I saw this article in The Guardian – the President of the Royal Society saying that refusal to wear a mask “should be as taboo as drink driving”.  I couldn’t agree more.

The sooner it becomes a social norm – the faster we get over feeling silly or extreme or over-cautious – the sooner we make inroads on reducing transmission of coronavirus and thus reducing the incidence of illness (and long-term after effects of illness, and deaths). 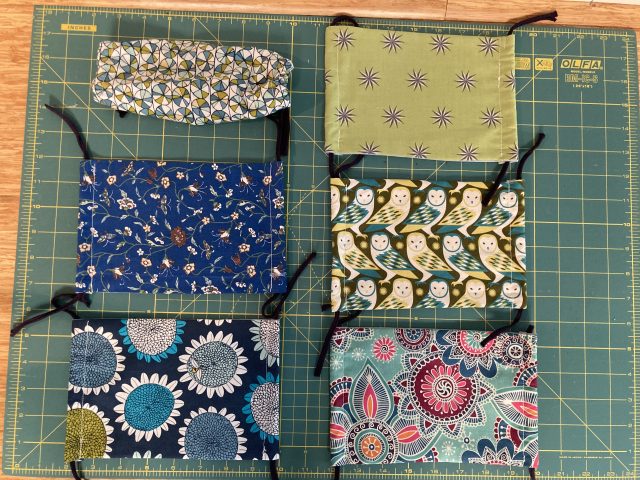 Now I've passed 60 I'm still doing all sorts of things I haven't done before, as well as carrying on with the things I already love. I live a happy life with my long term love Malcolm. In my blog I explore local and low tech ideas, food, growing, making, reading, thinking, walking, and lots of other words ending in 'ing'.
View all posts by deborah @ the magic jug →
This entry was posted in Community, Craft, Do what you can with what you have, In the time of the virus and tagged Community, Coping, face coverings, face masks, home made face coverings, lockdown, Public health, Reflections, Social distancing. Bookmark the permalink.

2 Responses to In the time of the virus: to wear or not to wear, that is the question – face coverings