I really really wanted to finish the walk before we go away on holiday later this month, because otherwise I wouldn’t be able to find enough days until November, by which time the days will be short and the weather less likely to be good.  So, I ditched any other plans and pencilled in three consecutive days to get it done.

I don’t want to seem like some kind of martyr, because I most certainly am not, but after several decades usually prioritising other people’s needs over my own wants, I find it is suddenly exhilarating to put my want (definitely not a need, this) first.  Something I think I could get used to enjoying (and a muscle I now realise I should exercise more often).

I invited a good friend from London to join me for this stretch of the walk, and we arranged to meet as early as I could reach Datchet, given the limitations of the train timetable.

I enjoyed the journey back to Datchet – it was complicated (a replacement bus part of the way, 4 changes, a missed train – my fault entirely – replaced by a quick hop into a taxi)), but in the end it all worked fine, and I was amused to note that the route pretty much replicated the whole of the walk so far but took just 3 hours.  The difference speed makes.

We set off from Datchet at midday and walked to Runnymede as planned, arriving  for our assignation for a cup of tea with another blogger, Jane from Yarnstorm Press.  I really enjoyed meeting her.  So strange how reading someone’s blog for years can give you the sense that you know them well, whereas of course really you’re complete strangers (though not so complete in this case, as I went to one of her excellent quilting workshops a while back).  Anyway, she is as interesting in real life as in the virtual world, and I felt we could have chatted for ages.  Among other things, we talked about her enthusiasm for stained glass, and there’s nothing like hearing from an expert to help you look at things in a different way *. 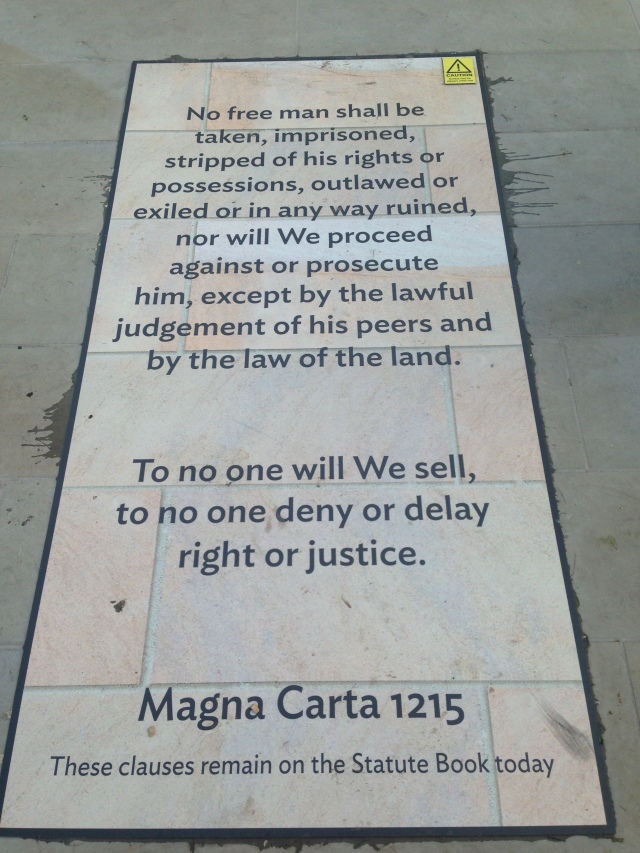 But – I had miles to walk that day, and needed to press on.  So on we pressed.

Oddly, I was underwhelmed by Runnymede.  Maybe I should know more about Magna Carta, but I couldn’t get too excited about a bunch of barons agreeing a division of power with a king.  Given my politics and my background as a lawyer, I felt I should be more fired up by it, but compared to my visit to St Mary’s Putney and what I learnt there about the Putney Debates, somehow I wasn’t.  ThoughI have to admit that the clauses shown above in the photo of course are crucial (and scarily at odds with the prohibitive cost of accessing justice these days – a contrast to my early professional life in the late 70s and through the 80s working as a legal aid lawyer).

Something else that failed to fire me up was the rather odd statue of the queen.  Not only did I find it naff (I could’t help but think it looked like it was made of melted chocolate, and it reminded me of the ghastly sculpture at St Pancras Station), but a statue of the queen felt oddly inappropriate as a celebration of something that laid the foundations for the freedom of the individual against authority.

Reflecting on Magna Carter later, I remembered the talk that daughter-in-law and  I went to earlier this year at the Bath Literature Festival, when Jon Snow interviewed Shami Chakrabarti, Director of Liberty.  She spoke about human rights and the need to defend the Human Rights Act against attempts to repeal it.  She most certainly did fire me up (you can read an article she wrote for the British Library if you want a brief summary of her arguments).  Shami Chakrabarti really is an inspiration to me – highly intelligent, articulate, brave, and funny too.  What a combination.

Oh the irony of a (our) government marking and celebrating the 800th anniversary of the sealing of Magna Carta whilst at the very same time talking about repealing the Human Rights Act.

Anyhow, back to the walk.  Runnymede didn’t detain us for too long.

Fortunately, a little further on the mural below, at Bell Lock, was more to my taste.  Commissioned by the Environment Agency, it was created by Helen Brady with students from a local college.

We walked on to Staines, which I rather liked, to Penton Hook, which I also liked, and a brief detour to a pleasant pub in Laleham for some shade and a drink.

Along the way we enjoyed seeing the remaining boat yards.   There was a nice contrast between these working environments, slightly battered and decidedly not spruced up, and the houses carefully tended.

A view from the bridge 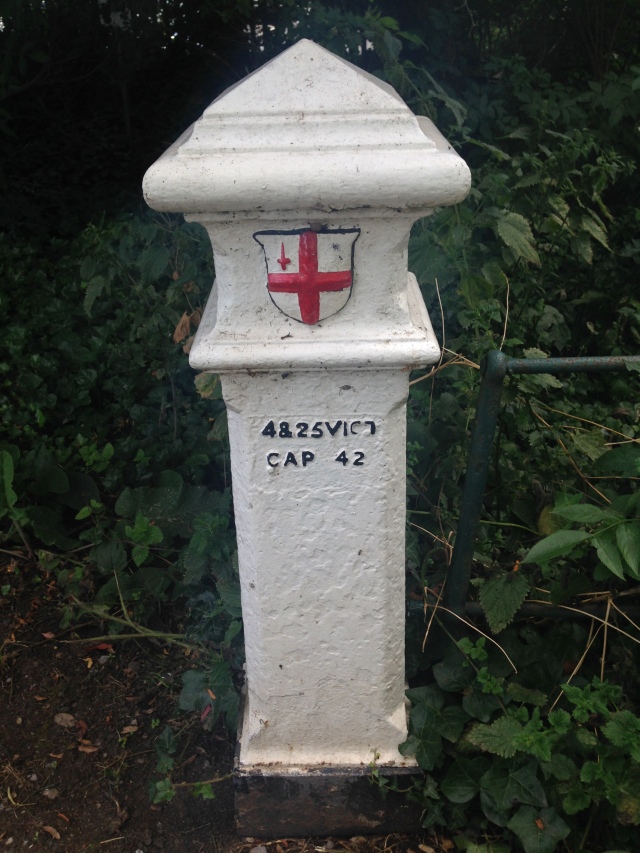 Then on to Shepperton, where as planned he left to take the train home, and I continued alone to Hampton Court.

In truth, I think he was flagging rather by then, and I felt both ashamed of myself for trying to rush him at a faster pace than was comfortable for him and and impatient to push on as I knew that time was passing and in order to finish the walk, I would need to pick up the pace.

Which neatly illustrates one of the things I’ve learnt along this walk – that when you’re doing this kind of walk with a fixed start and end point, and fixed points along the way where transport is available, you really do have to know what pace you’re comfortable walking at, how long the walk is likely to take you, and plan accordingly.  Which then makes it difficult to adjust for someone else’s pace.

So, we reached Shepperton later than I expected, but fortunately the little ferry across to Weybridge (summoned by the bell) was still working.

Even dolls want to have fun by the river

I carried on alone, and two hours and approximately another 6 miles later, I arrived at Hampton Court.  Very hot, very tired (and very smelly).

Also very hungry.  But oh my goodness, my B and B hosts kindly and unexpectedly offered to make extra soup and feed me on arrival.  And when I finally arrived, they not only gave me soup but a whole meal, and not just a meal, but we ended up having an animated conversation late into the night – I had chanced upon a lovely couple full of experiences very different from my own (though also very similar in some ways), and we swapped opinions and ideas.  I learned a lot, and was entertained.  We talked about politics, London, diversity, race, the legacy of slavery and empire, and even football.  I can confirm that old north London Arsenal/Spurs rivalry is alive and kicking.

Which all fitted rather well with the visit earlier in the day to Runnymede (apart from the football bit of course), and my planned return the next day to St Mary’s Putney to find out more about the Putney Debates.

*and in the evening, I read Jane’s latest post about stained glass – next time I will be sure to look at the feet.

**yes, that was indeed a foot note.